My latest article for FaveCrafts is a tutorial on making a crochet hook organizer. It was on my bucket list for quite a while and every time I dug into the zippered pouch for the right hook wondered why, oh, why, hadn't the organizer been made. One morning after one last search for a hook I decided today was the day. I had all the materials needed and it wouldn't take long. The design had been in my head so I got busy and in a couple of hours it was done.

The table beside my chair is small so there is no room for anything much more than my lamp. The organizer would be made to fit around the base of the lamp but can be free standing. 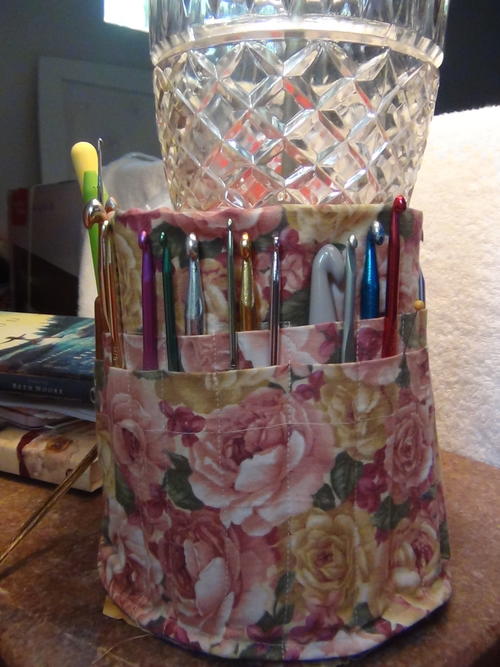 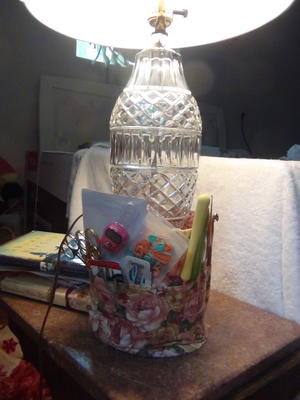 The crochet hook organizer holds all my hooks plus my scissors, stitch markers, etc. and I wonder at myself for not making it much sooner-it would have saved me a lot of time and aggravation.

Here is the link to the full tutorial with instructions:

My repertoire has not included restoring a knit afghan-first off-I don't knit, crochet, yes, knit-no, but one of my daughter's friends, Mandy, had a tattered baby afghan and would I please look at it. It had been discarded by mistake and was rescued from the trash pile.

The treasured baby afghan had been a gift from Mandy's father at the birth of her first child, Whitney. Now Whitney was expecting her first baby and Mandy wanted the afghan restored as a surprise.

Here is what Donna brought for me to look at and said "if you don't want to fool with it, just say so"-well, it was an interesting challenge. Most of the damage was in the border but some raveling was in some of the center I would like to have saved. I looked and thought on that afghan for several days. Donna said she would like for it to be "puffy" and I agreed, also lace, she thought and again that sounded good.

On a foray to Joann's I saw a vintagy looking print that I thought would be perfect with birds. Donna said the nursery was gray and pink and the afghan wasn't white-it had a pink cast to it that we wanted to match. But guess what?-All the pinks were too bright, too dark, not the right shade to match the afghan and I cruised through the aisles several times and went home empty handed several times. 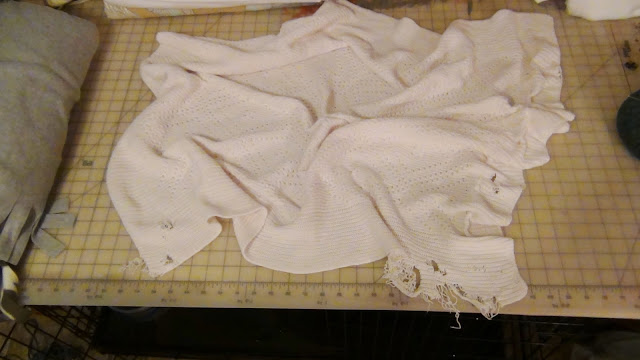 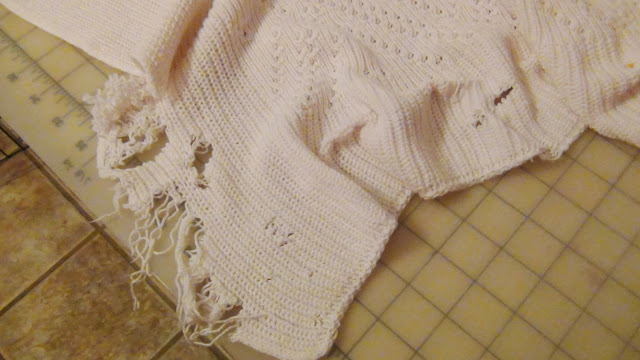 I did go back to get the little bird which was a grayish print and thought about painting the whitish background in the pink but when compared with the afghan it took on the pinkish cast. 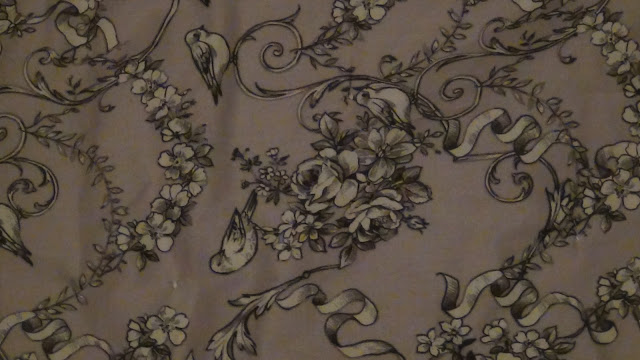 The center of the afghan was stay stitched all around to keep it from raveling and outside the stitching was cut away but I still hadn't decided how it would be finished. No laces or pink fabrics had shown themselves that had the delicate look I was searching for.

AAhhh-I can crochet, checked out the yarns and voila we found a beautiful soft petal pink and dove
gray that were near perfect.

Before any crochet could be done the damaged sections had to be repaired. To have a perfect match to the afghan, I unraveled enough yarn from the border that had been cut away to kind of weave the holes together and did a pretty decent job. You have to look fairly close to find the repairs. 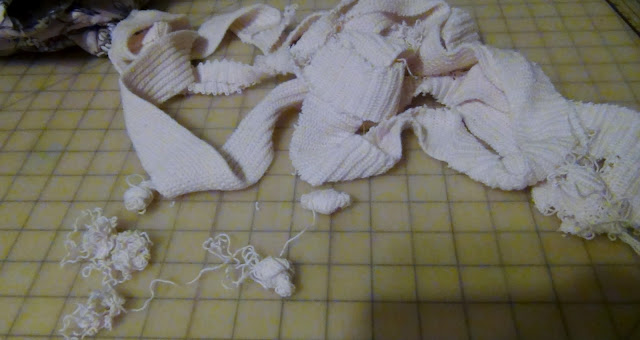 A crocheted border was added in alternating pink and gray: 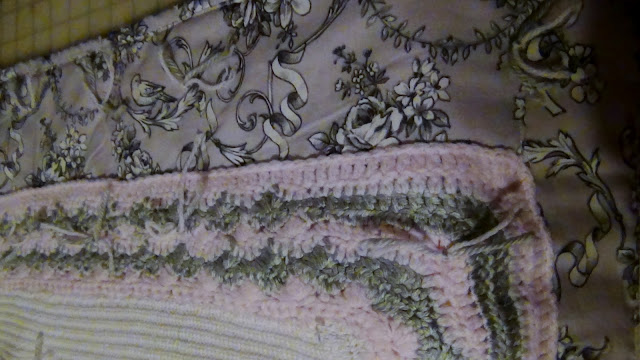 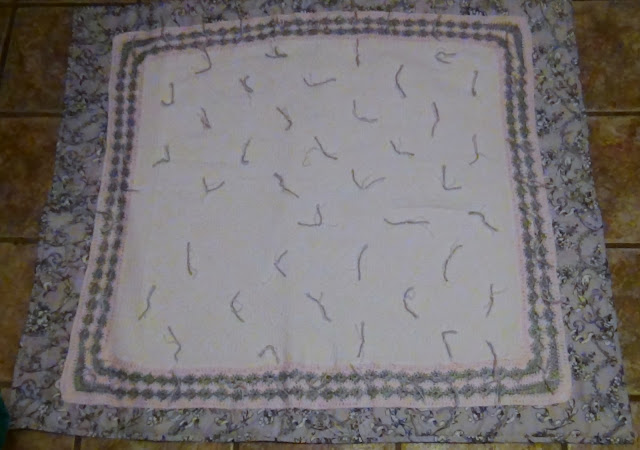 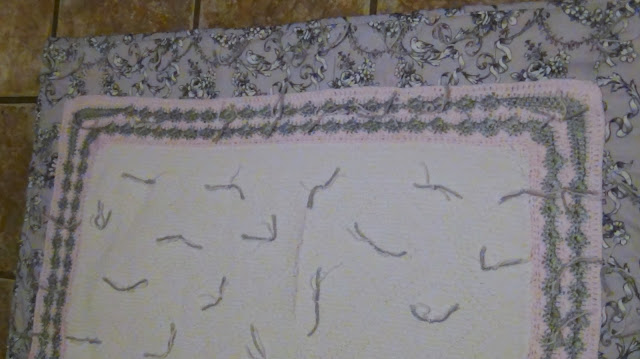 After the border and backing were added an old timey tacking was done using the pink and gray yarns. I actually machine bar tacked the yarns onto the newly created quilty afghan so I didn't have to struggle with pulling the yarns through the fabrics.

The little bird fabric is very soft and gives the vintage look and feel the afghan called for. 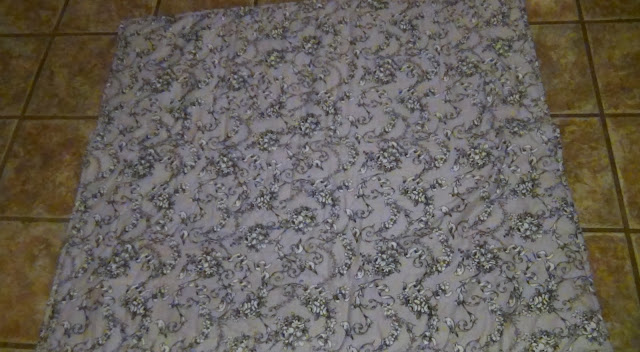 Like I said, I hadn't up to this point restored a knit afghan and don't know if I would tackle the job again but I didn't want a family treasure to be either put in the bottom of a drawer or thrown away. There were a lot of hours involved in the mending and then the crocheted border but it was done as though it was being done with one of my own treasures. In fact, while thinking of writing about Mandy's baby afghan, it brought to mind one of mine that I plan to share soon.

By the way, Miss Tenley Blake made her arrival a few days ago and she has a wonderful piece of family history that was given years ago to her little Mama by her great, grandfather.

May God bless you and thank you for stopping by Carolyn's Canvas.
Join me also on Facebook
@ https://www.facebook.com/Carolyns-Canvas-Quilting-Crafting-Sewing-151145938331115/

I finally got around to making my armchair organizer that had been on my bucket list for a long time and glory of glories even wrote a tutorial for FaveCrafts.com where more photos are available.
@
https://www.favecrafts.com/Sewing/Easy-Sewn-Armchair-Organizer 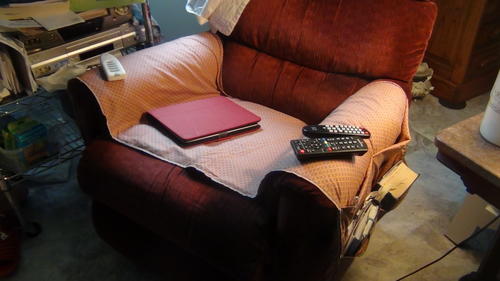 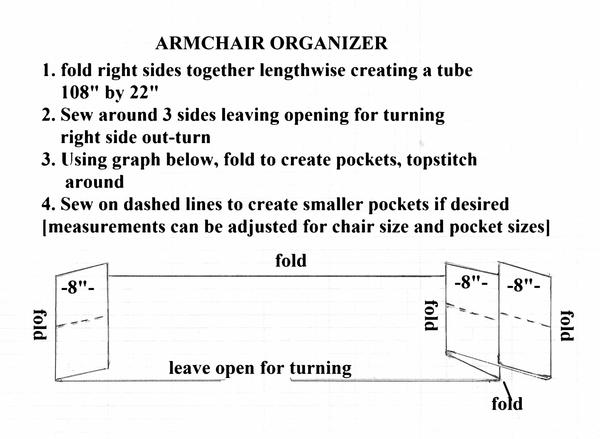 Why in the world this took so long I'll never know, just my procrastinating self. Now my remotes, and other paraphernalia are handy and off my table and it was done in less than 2 hours with fabric that had been in my stash for a long time.

I made the organizer for myself but it would make a great gift especially for anyone in a retirement or nursing home.

Posted by Carolyn Wainscott at 3:44 PM No comments: Links to this post

Ever since I began seeing duck tape mannequins it has been on my bucket list and finally got around to it when great, granddaughter, Hannah, started designing her own clothing. Making one with her was a hoot and she used it a day or so after we completed Belle [her mannequin's name] that was a big help in making a skirt that Hannah wore to school the next day.

Here's Hannah wearing the skirt she made with Belle-her duck tape body double. 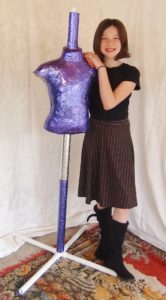 Here is an article I wrote for Cheap Eats Thrifty Crafts about Hannah's mannequin that shows our process. The editor loved the photos of us. My camera takes photos as it rolls-ah, the marvel of modern technology.

We had a fun time making the mannequin. Only took one evening to do and cost about $7. Of course, one for me would have been a bit more-lol. The article includes instructions for the stand and mannequin and is a whole lot cheaper than having to purchase one. 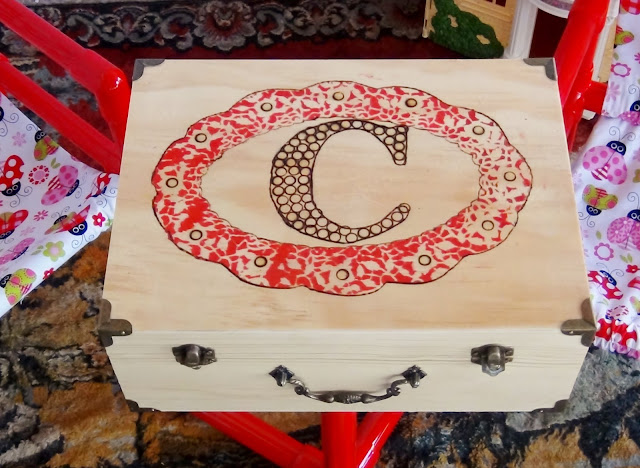 My DIY Kids' PVC Loveseat & Chair With Stow-A-Way Table is my latest pattern online. It isn't my latest design because it has been on my bucket list along with lots of others for a while. The set is easy to make and put together and is collapsible to store away.

PVC pipe is available in any plumbing department in 10' sections. The printing can be easily removed with fine grit sand paper or steel wool if plain white furniture is being made. This set was painted with Rustoleum Spray Paint that bonds with plastic, however, PVC is available in different colors.

The unfinished wood box for the stow-a-way table was stenciled with a paper doily around a wood burnt C for Charlotte then finished with a clear matte milk paint. It holds her little tea set just fine but would be great for drawing materials and other things.

Some of the tee fittings are only available in furniture grade while some can be found in the plumbing department-complete instructions are in my pattern. When the doll furnishings were made several years ago, I researched PVC and found the most economical fittings could be purchased from the FORMUFIT Company at www.formufit.com. [Nope, I don't own stock in the company and this isn't a paid for plug] Again, when it came time to make the larger pieces I checked around and found FORMUFIT to still have the best prices. To save shipping costs, you have the option of ordering through Home Depot.com and having delivered to your local store for pickup. The helpful salesperson in the plumbing department at Home Depot clued me in on that little secret. Since I found about this option of saving shipping costs, I may weigh the difference between spray paint versus colored PVC-saving time versus diy painting. My frugal self didn't want to pay the shipping for the PVC pipe sections but with free shipping -colored PVC may be in the future of my next venture.

My original pattern was designed for the American Girl doll and other 18" dolls. I made several pieces of pvc doll furnishings because it was easy for me to make without any help. This original loveseat and chair were made for great granddaughter, Ashlynn, years ago but has been taken over by great, granddaughter, Charlotte who is not quite 2 years old. Charlotte carries around the doll set and sits in it herself with her dolls and stuffed animals but she has outgrown it so it was time for a Charlotte version. She should be able to use the set till she is 5 or 6 years old. The stow-a-way table is about 22" tall while the love seat and chair are 24".

Charlotte's DIY Kids' Loveseat & Chair With Stow-A-Way Table are the first thing she runs to as soon as she comes in. She grabs my finger and wants to have her pretend tea with her dolls and stuffed animals. The love seat is big enough for her and her baby brother together.

The pattern with complete instructions for Charlotte's loveseat, chair and stow-a-way table are available @
https://www.craftsy.com/other/patterns/kids-pvc-loveseat-chair-stow-a-way-table/491141
and the PVC loveseat & chair pattern/instructions for American Girl and other 18" dolls is available
@
LOVESEAT & CHAIR PVC PATTERN FOR AG DOLL | Craftsyhttps://www.craftsy.com/other/patterns/loveseat-chair-pvc-pattern-for-ag-doll/305552

The PVC doll loveseat and chair have been played with for years and it looks as though the kids' set will be just as well loved.

Happy crafting and I hope your children enjoy this set as much as mine have.
Carolyn Wainscott

Posted by Carolyn Wainscott at 4:33 PM No comments: Links to this post