I have to tell you, I love auctions and woe is me, I've discovered online auctions and could get into big trouble if I don't watch it. Oh, I'm not talking about Ebay. I did that too and had fun, have gotten some real bargains-that is the name of the game for me-bargains. I enjoyed bidding and selling on Ebay for a time and still cruise now and then when I need an embellishment or trim-have been disappointed not too many times.

Len and I even bid on a large house on 15 acres before we bought our home in Indiana-now that was an adventure. We didn't get it and its a good thing, the Lord was really watching out for us there. It was an awesome house, though, the walls were a foot thick, it was a federalist style, built in mid 1800's, two story with center staircase in the entry. I had already put all my stuff in that one mentally before the auction but we were outbid. That morning on the way to the auction, Len asked which of us was going to bid, I told him he had better because he had a cooler head I would probably get too excited and keep going over our limit and boy, did it go over our limit.

We also went to several auctions after we retired to Indiana in 2000. I got a box of vintage ladies gloves at one with over 30 pair and there were lots of other odds and ends-did I tell you I love auctions?

Then a friend told me about those online auctions selling whole households and office goods.

The local auction company here in Cincinnati is Everything But The House and they have expanded into other cities.  I only bid on items that are a short drive from me. The first thing I won was a canvas folding screen that I plan on using for a design/display wall for my quilting/sewing room. It folds out to over 8'. I always google items before I bid and this one had been priced at over $300. It was mine for just over $50. 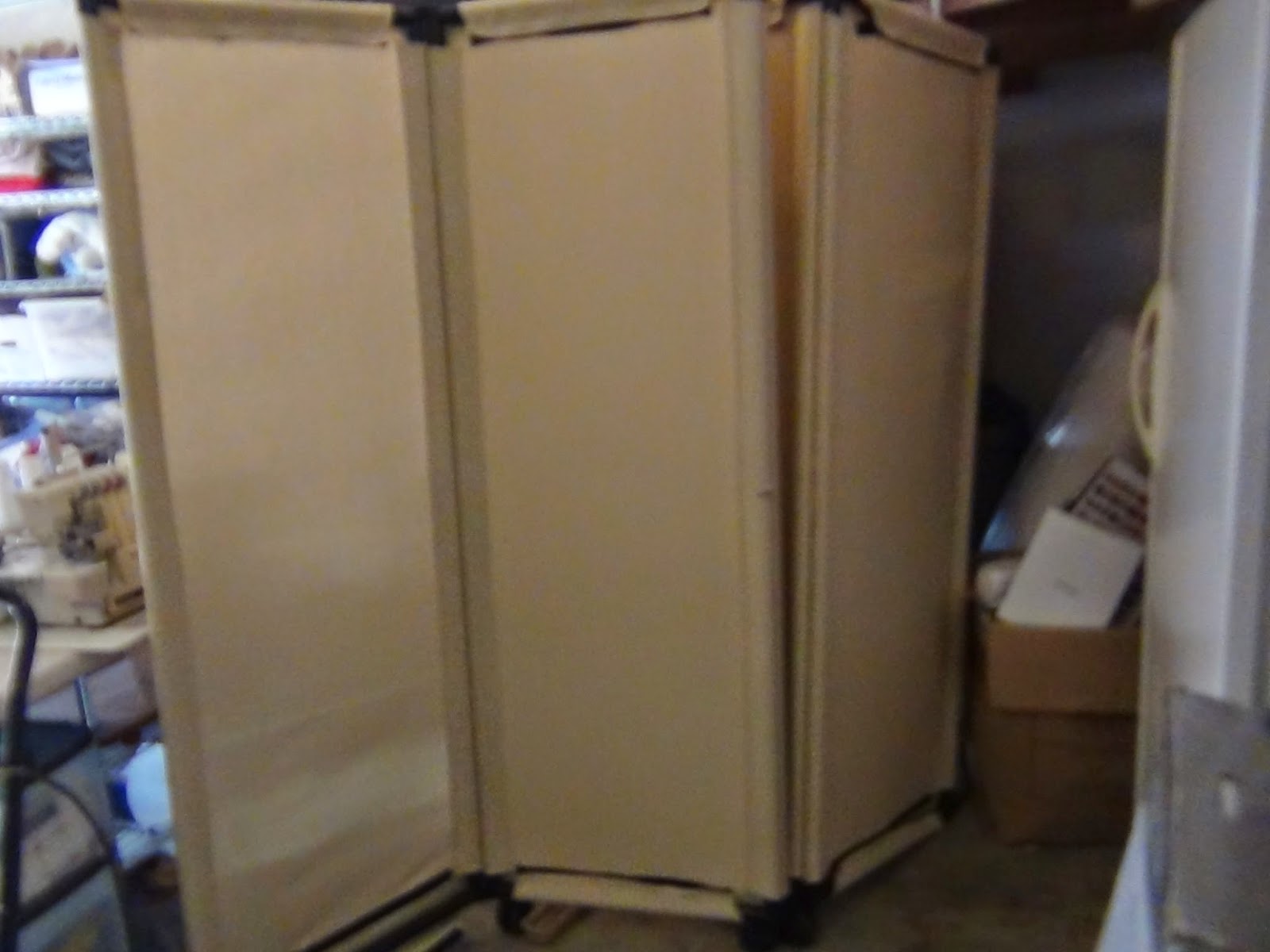 Also have gotten: a fold up box spring for $10, 2 new wooden chest of drawers in box for $35 each, 4 microwave ovens for $25 each, a black velvet mannequin head, a large dry erase board for less than $2, these 60 cent craft sticks that were handy so took photo: 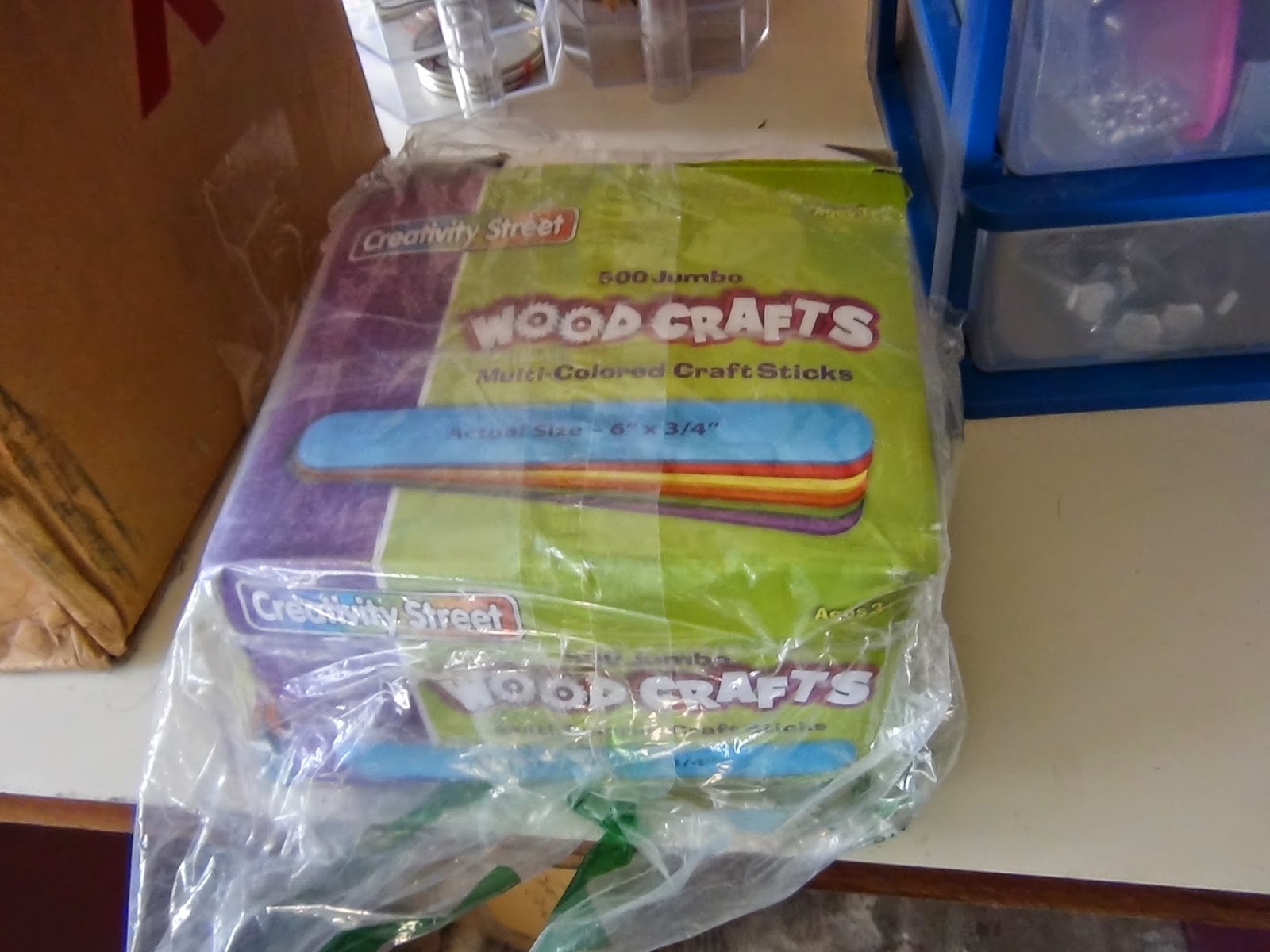 new in box file for less than $7 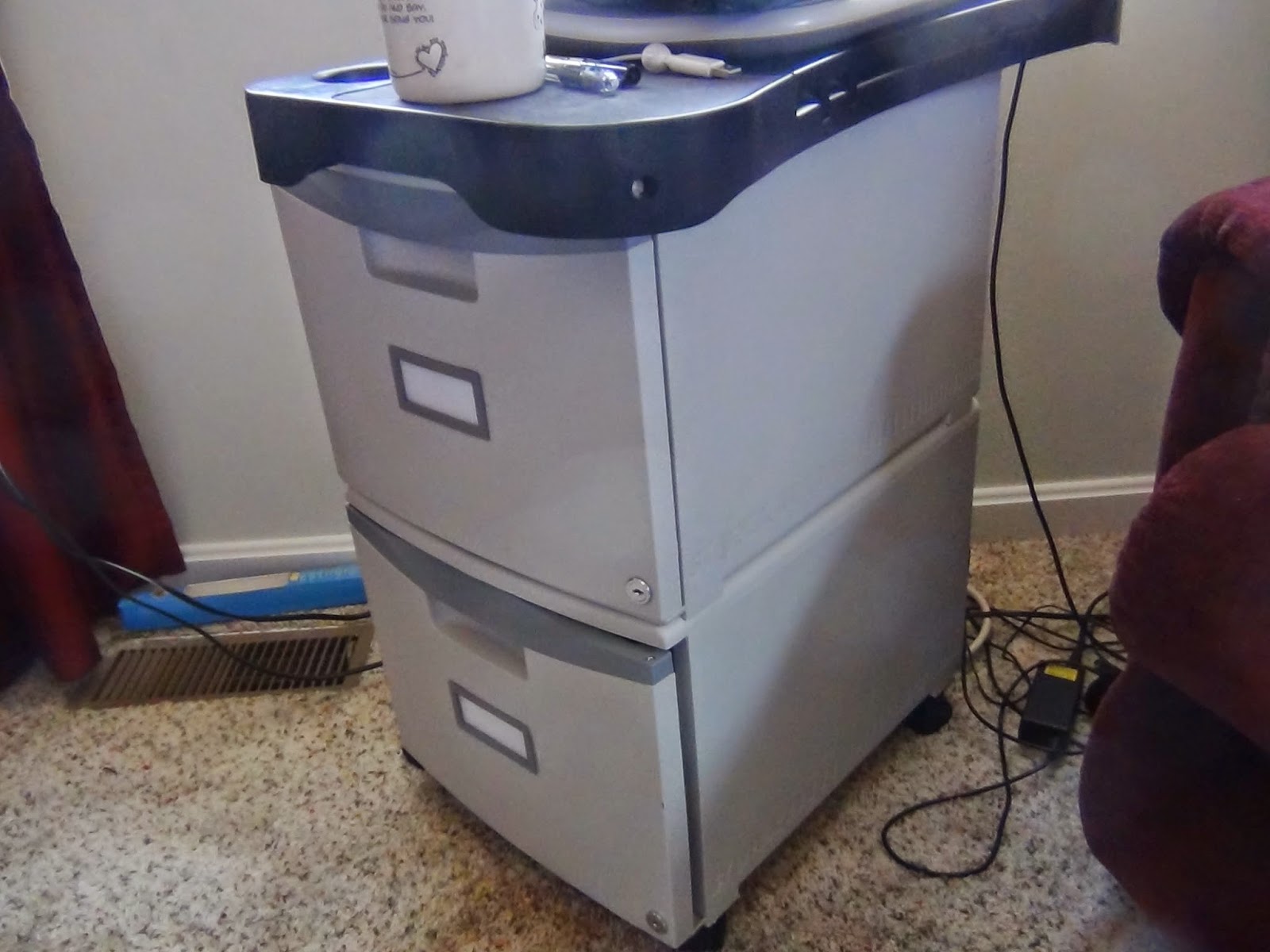 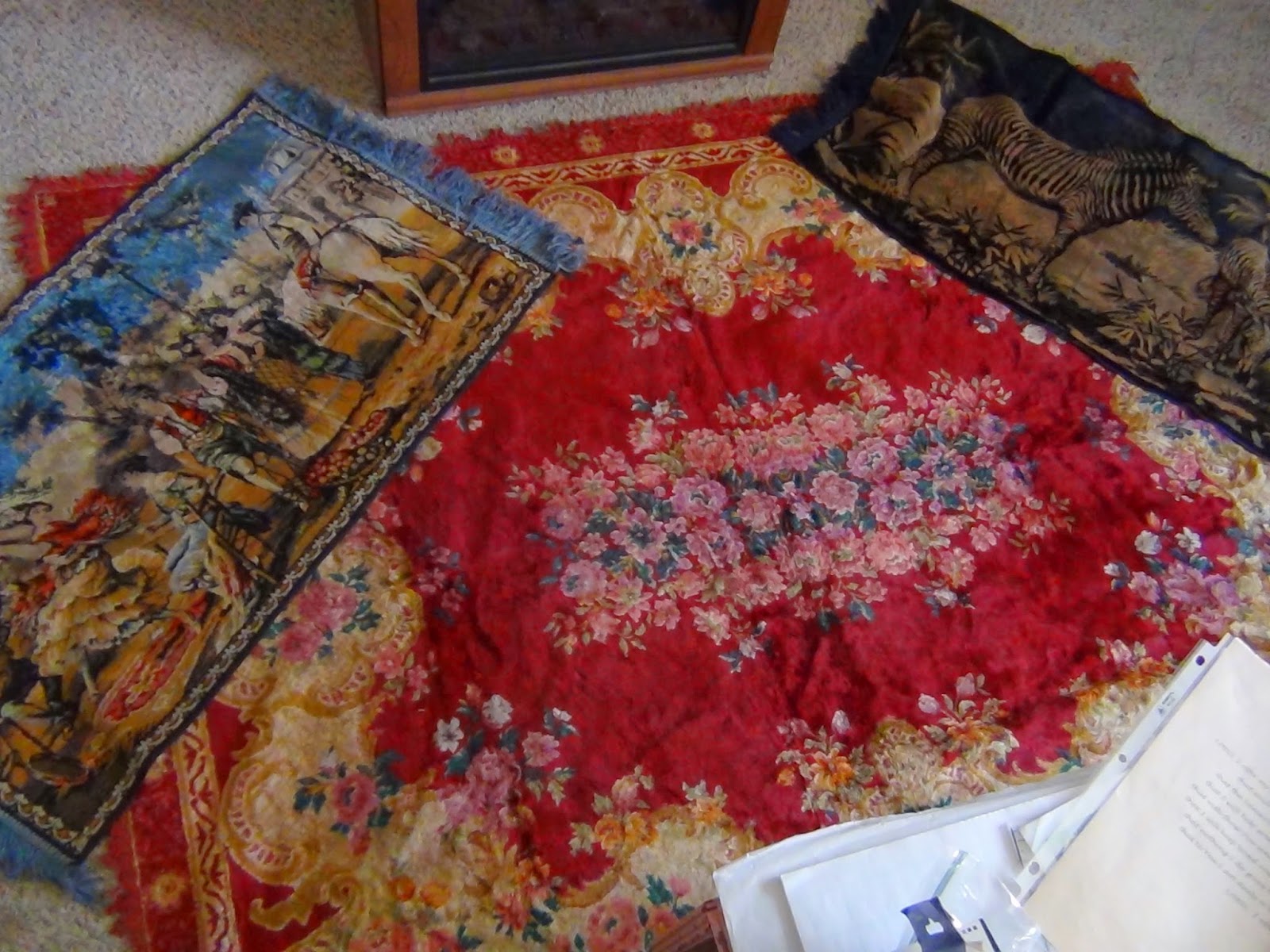 But my absolute thrill, the reason for writing about auctions are my dining room chairs. I had been looking for over a year for chairs for a wonderful teak dining room table with matching buffet. We had shopped furniture stores, yard sales, local online yard sales for decent chairs we could afford. We wanted at least 8. I had also bid on several sets of chairs at the online auctions but was always outbid. One set I thought was so gorgeous but my daughter was afraid I was going to win them. They were a gray leather, barrel type that would have suited our dining room so well because she had painted a two tone gray-still can't figure out why she didn't like those chairs. I kept watch on them all night, upping my bid but they went out of site on me and I had to cease and desist. I even had bids on 2 different sets of chairs in the same auction at one point but wouldn't go over a certain limit I set for them. It is such a good thing those didn't go through. I watched this particular set of chairs all viewing week and made up my mind, would go the limit for the set. They were rattan with leather stripping and seemed to suit the teak so well and I was tired of looking. These were just our style, casual, not too formal and there were 8 of them. One thing that was in my favor, too, the bidding closed in late afternoon, not evening when most people were home from work but these were going to be mine, I wouldn't be outbid but great balls of fire, I got all 8 chairs for $183 and my son went and picked them up. 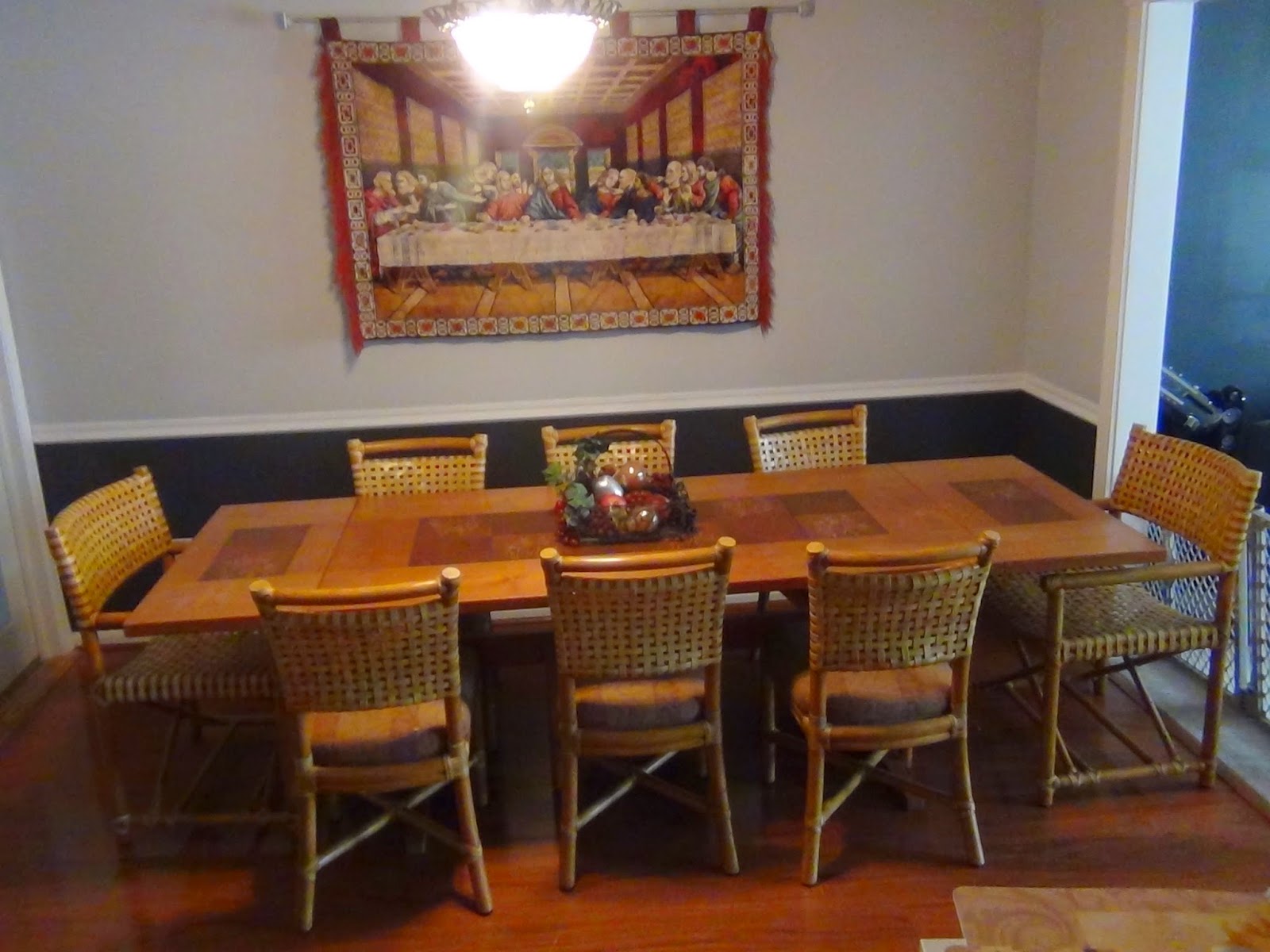 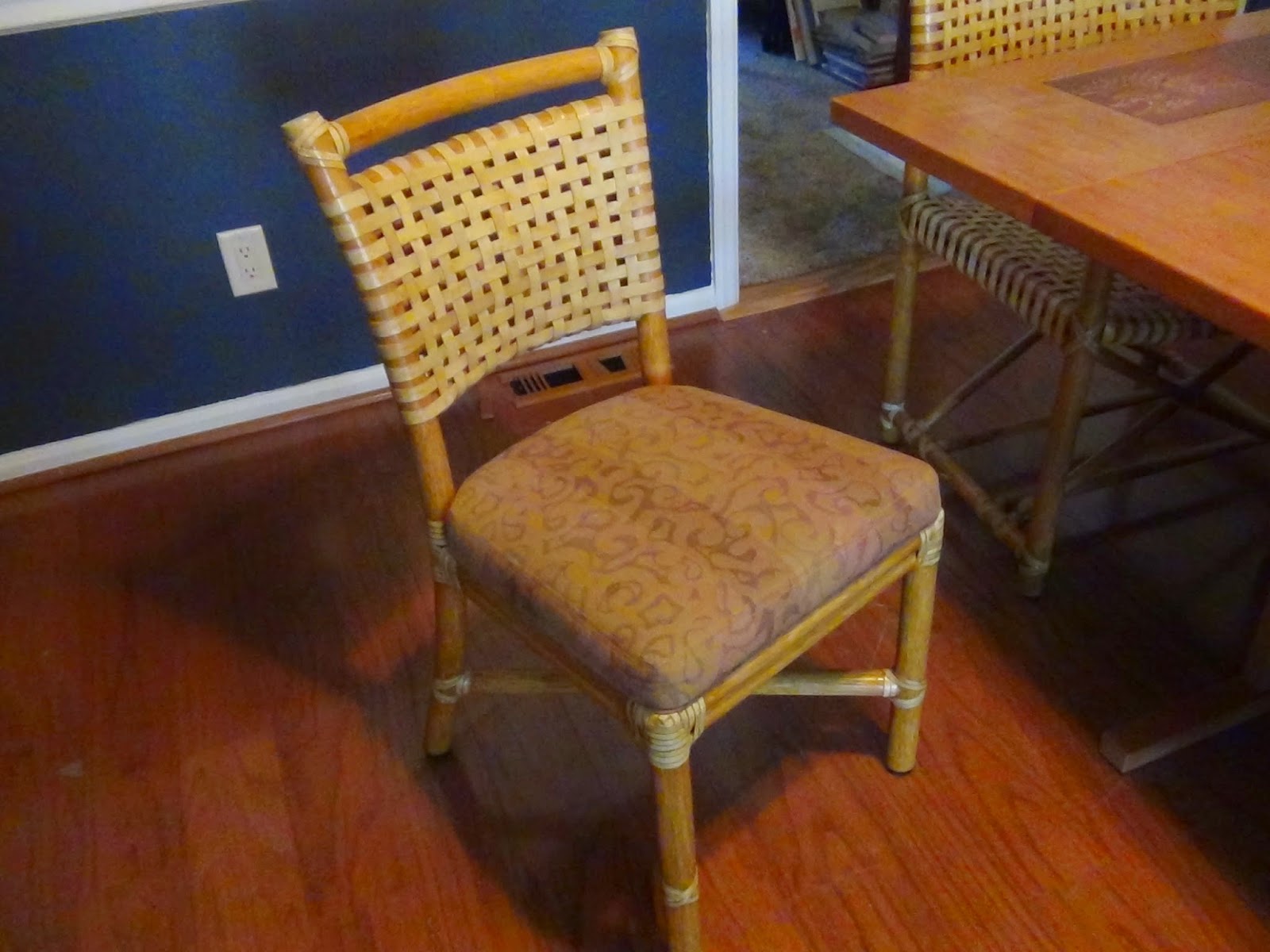 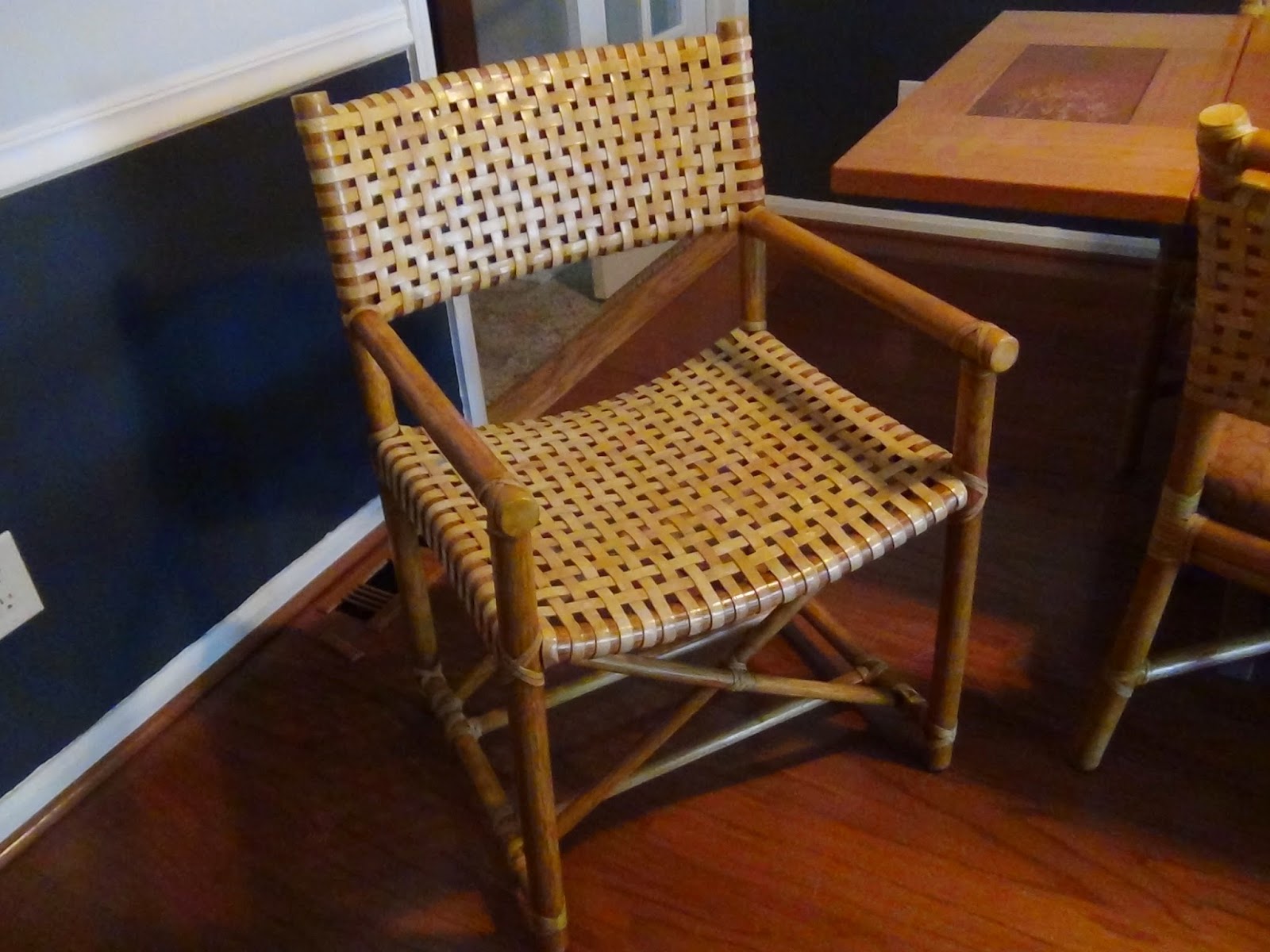 I don't think the photos do them justice at all. They are just about the sturdiest chairs I have ever seen and I love'em.

While Jeff was unloading them from his truck we discussed what we thought they had cost originally. His guess was under $100 each but I had been looking for over a year and thought I knew what things were going for-my estimate was at least $300 each. We put them around the table, they were perfect. They look new.

My curiosity was killing me, I had to know how good a buy I had gotten. There were labels on the bottom-the manufacturer and designer so I went online and looked them up. They were still available and I mean to tell you, I did get a great deal. The side chairs were over $1700 each and the armchairs were listed at $1900 each. With the chairs, table and buffet we have a $14,000 dining room set with an investment of about $550.

A word of caution, though. You do have to watch what you are bidding on and read the description carefully. I haven't been disappointed with anything from Everything But The House but another giant warehouse auction site has had to refund my money a couple of times and it is a real adventure to have to go to a giant cavern of a place and wonder around to find your lot to pick up your bid items. Check everything out, maybe get something small at first, it can be frustrating.

But, did I tell you I love auctions?

Right now I stay off the auction sites, there may be something I can't live without. My home is nicely done, we don't need a thing and we have made a pact not to buy anything that is not a necessity right now. I spent a lot of time looking, I won't count that as all wasted time but now have a lot I want to get done so my time can be better spent on those things.

It was fun and interesting for a while and probably will be again but not for now.

Happy crafting/quilting/sewing and auctioning, yard saleing and if you get some super bargains let me know. Great bargain hunting is an art, too, don't you think?

Posted by Carolyn Wainscott at 2:19 PM