It has been a long time since I saw the movie "First You Cry" with Mary Tyler Moore. I didn't remember until I looked it up to make sure who was in it that it was an account of news correspondent, Betty Rollin. I only remember seeing it once [it was made in 1978] but her turmoil stayed with me. That was 12 years before I had breast cancer myself in 1990.

There was so much going on in my life at the time, I couldn't take time to cry or concentrate on my own situation. Because of my faith in God, I had a calm and serenity that everything was going to be fine-and it was. After my outpatient surgery, I went back to taking care of everyone else. My children nor my mother were told because I didn't want to worry them. My doctor told me that my "wayward germ" as I called it, was cancer and not to be taken lightly. In   http://carolynscanvas.blogspot.com/2010/11/my-therapy-my-quiltsel-tigre.html ﻿I take you through my way of working through hard times with my faith and crafting as many others do.

Now, we are dealing with breast cancer again only this time the "wayward germ" has to be taken very seriously. Niece, Debbie, was diagnosed with breast cancer in March but hers was not found as timely and she had to have a double mastectomy in May after much, much testing and all the other preparations that has to be done.

Shortly after Debbie's surgery, I wrote: http://cwainscott.blogspot.com/2011/06/family-being-sisters.html to tell of the great bond between sisters.  This photo of Debbie [left] and Cathy [right]  was taken at a fundraiser for Debbie and her family to help with expenses. 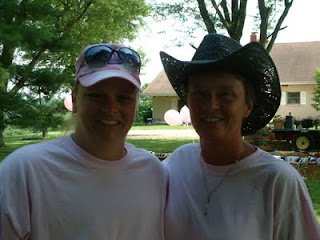 This hard road for Debbie and the whole family continues with a year of chemo and radiation but Debbie is so appreciative of all that is being done for her, she wants to give back. She was given a "cami" by the Cancer Society that held the drainage tubes she had to wear after her surgery. It was such a comfort and help to her, she wanted to learn to make some to donate back for other women. She says she will always keep the one she has, even though it is not the most beautiful thing in the world and instead of reminding her of the traumatic surgery she has gone through, it reminds her of all that has been done for her and her family and that God is with her.

Putting the shirts together was kind of a family affair-my brother, Larry and his wife, Delores, donated shirts. We originally planned to have a "sew-a-thon" all together but circumstances didn't allow that between all of Debbie's after care and chemo treatments for my husband for cancer discovered after Debbie's was diagnosed. My sister, Shirley, Debbie's mother, suggested this post be called "Between Chemos" and would have been rather apropos, don't you think?

The following video was done in our mother's room in the nursing home so she could be part of what we are doing. We hope to encourage others to "give forward" as Debbie is doing. Her sunshiny personality belies all she has been through-she is crocheting to give to others and being a great example for her twins, Summer and Sierra.

Just as Debbie was diagnosed the song, I Will Stand By You, came out and was taken by Cathy as her theme song to Debbie. It was played at a fundraiser and Cathy had a friend help her with the song since she didn't think she could get through it by herself. I thought it fitting to include.

Here is Debbie telling us about that cami that meant so much to her:

Please be in prayer for Debbie and her family and for all breast cancer patients. Let's pray for a cure for this devastating disease. Thank you.

Posted by Carolyn Wainscott at 4:57 PM