Marie Osmond showed her solace room today on Oprah as she told the heartbreaking story of her son's death. The room, she said, is where she goes for comfort and peace, to read and do her crafts. The walls are covered with memorabilia she has saved and made. There were quilts all around.
My quilts and other crafts have been my therapy and expression through the years in many situations. Creating has been a retreat that has smoothed the coiled nerves in my shoulders, decreased the knot in my stomach, help me even for a moment lessen the ache in my heart or forget the raging headache.
My 1990 physical showed nothing but my gynecologist insisted on me getting a mammogram. Suspicious spots came to light in the test and I was scheduled for surgery. A spot that could not be detected by the gynecologist a month or so earlier now could be felt by the surgeon and it was near my lymph nodes.
Not knowing how invasive the surgery would be, how long the recuperation or if follow up therapy would be required called for preparing some handwork I could do in that time. Just sitting, doing nothing drives me crazy.
"The Project" book came out. Now, "The Project" book had pages of ideas for quilts along with drawings, clippings, cutouts, pictures or anything else that would help get the idea to reality and there was the perfect "cancer" project. If everything were to be prepared so that I could sit and quilt, this is the one. This is the one that had been on the back burner because it would require so much sit down time and here was the opportunity.
So, "El Tigre" walked off the pages onto my fabrics to become a queen size quilt. I had imagined walking through a steamy jungle, pushing aside foliage to see a stalking tiger. At some point, the stalking tiger drawings gave way to a resting, peaceful one in a clearing as I became at peace with having cancer and leaving the outcome in God's hands.
A lot of preparation had to be done before surgery on "El Tigre". The back of the quilt was to be a tiger stripe so it was tie dyed orange and black to coordinate with the front. Each piece of foliage, tree trunk, flower had to be cut and ready for applique. The large foliage foregound was to be three dimensional to give the effect of peaking through it. The tiger, herself, was prepared to be reverse appliqued. I needed to get as much done as possible.
The surgery went well. The surgeon told my husband he was sure that he had gotten all the cancer.
A few days after going home, I was back at work on my cancer quilt. A month later my oncologist sent me back to surgery to have more tissue removed. She felt this would keep me from having to go through further treatment. The quilt was no where near being done so now I would have more down time. A few days after the second surgery, quilting continued and continued and continued.
I usually have to have a deadline in order to get a project finished so "El Tigre" was entered into a quilt show to make myself complete it. My husband worked nights so most nights were spent quilting til 3 or 4 in the morning, then catch a few hours sleep and back up to quilt some more. The cancer was forgotten and this is the only quilt that I have completely hand quilted.
I thank God that I have been cancer free for almost 20 years now. There have been other quilts-other situations, other inspirations. That big tiger on the center of the quilt, I have come to realize is me, peaceful, knowing that God is in control.
EL TIGRE
El Tigre has been called a piece of soft sculpture and has received honorable mention for its quilting and coordinating back.
PSALM 91:4
He shall cover thee with his feathers, and under his wings shalt thou trust: his truth shall be thy shield and buckler. 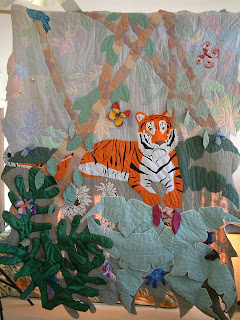 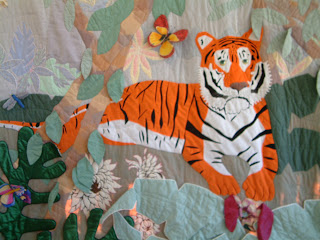 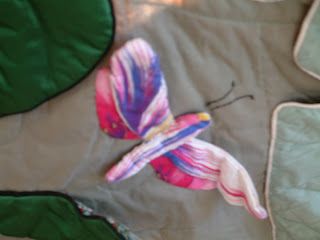 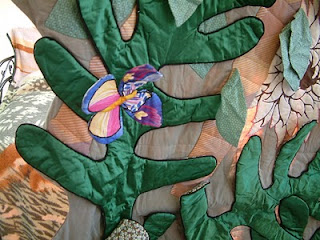 Posted by Carolyn Wainscott at 12:30 PM