I just love carrousels. People have given me several figurines through the years along with a couple of collector books that I cruise through on occasion and I have made some from children's hobby horses because I love creating and couldn't find the larger more striking figures that catch my eye.
What I really, really wanted was a full size, authentic carrousel horse but try as I may, my husband just would not agree to get one for me.
Some of them were only priced at $60,000. A amusement park was closing in our area and had an auction but I couldn't attend. I called the next week to see if by some chance there might be some not purchased that I could get at a steal. I told the man answering the phone "You have got to be kidding" when he said that some outlandish people had actually thought that they could get one for a few hundred dollars-did I believe that? I, of course, was one of those outlandish people!
Since my cheapo husband would not see fit to buy a carousel for me, I would have to make one for myself and I knew how to make papier mache and I had lots of newspaper, some scrap wood, an old coffee table, a 5 gallon water bottle, a wood pole that been a banister, flour for paste and lots of imagination. Maybe I could scratch together enough to get the other stuff I would need like chicken wire.
The base was prepared by removing the legs and adding castors to the 5' long coffee table top so the carousel could be moved easily. The 5 gallon water jug was attached to the middle of the base and filled with sand with the pole inserted to hold the horse.
Scrap wood was nailed together to give the general shape of the horse for the infrastructure then chicken wire shaped around that form.
Gallons of flour paste and months of saved  newspaper later, the horse began to take shape.
Some children and grandchildren come home after school to normal parents and grandparents but not mine. For weeks, they came home to a wild haired grandmother with strips of newspaper and glue clinging all over her, determined to finish this crazy project. Is it any wonder they may be scarred for life.
Around this time, my sister, Shirley, came in. When she saw the behemoth being built in the family room, she made the remark that it looked more like a Clydesdale rather than a carousel horse and thus "Clyde" got his name. I had just started nailing slats of wood together to form him without taking into consideration the final result.
Another person concerned with Clyde's size was husband dear. He kept telling me that if Clyde was to reside in the living room upstairs, he would not go up the steps in our tri-level. I would grab my handy, dandy scale that had not been used when starting the project, go over and measure the door to prove that yes, when Clyde was done, he would make it up the steps.
Clyde was quite handsome, I thought, when he was done and I was pretty pleased with him. He even had a light at the top of his pole. He was 8' long, nose to tip of tail and 8' tall to the top of the light.
Moving day was a big day for Clyde and for me. We had to have help. Not that  Clyde was so heavy-he was cumbersome, unwieldy. Bill, a friend of my daughter's, had been recruited to help and the first thing he said when he saw my gorgeous creation was  "Well, Golllllly" and I don't think he was admiring my atistic ability.
We rolled Clyde to the steps and lo, and behold-he didn't fit-with all my planning. Bill summed up the whole situation with "Wella, he doesn't benda".  He wouldn't fit out the patio doors either to be carried around the house to the living room so it was decided to force him up the steps. Clyde was tilted over on his side and pushed, pulled up the steps.
Moving day was kind of hard on Clyde. He was damaged a little getting up the steps but not so anyone else would notice.  I loved having him. I loved being able to create him. No, he wasn't as sleek as the hand carved masterpieces I admired but that was alright. He wore poinsettias at Christmases and gave Santa a ride and I have been thinking about trying another project like him for a while, I'll just have to check my newspaper supply.

HERE IS CLYDE WITH HIS CHRISTMAS RIDER 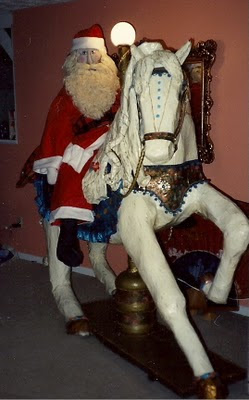 HERE IS HIS BEGINNING 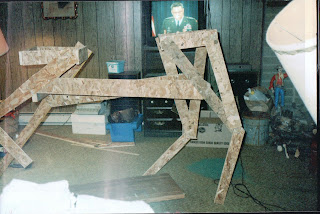 Here are some other things that my family has had to put up with me while I am in my creating phase. When completion is near, work is near fever pitch til the project is done to my satisfaction.

Posted by Carolyn Wainscott at 5:09 PM