A Doll Cradle From A Oatmeal Box

An article in the Reader's Digest magazine in the doctor's office caught my attention-"Are You Normal Or Nuts?"- I guess because I think most of my family and friends consider me to be at least borderline even though most are too polite to say but some are quite vocal.

I was glad to fit into the normal range in several of the examples but one kind of struck a chord. A daughter was asking whether her mother may be completely nuts when she found that her mother had shelves full of cardboard tubes because she couldn't throw them away. The diagnosis was that there may be a problem there. As I thought about my stash of recyclables, a lot of them cardboard tubes, I just didn't think there was too much wrong with the old gal because
"you just can't throw good stuff away,
you don't know when you might need it some day".
Don't you just love my last little line, pretty good, huh? I know its not Shakespeare or anything but its mine, all mine.

Since I am a bit of a saver of things that might have a future use-like cardboard tubes and whipped topping tubs and styrofoam meat trays and oatmeal boxes and cereal boxes, etc. etc. etc. I do catch an occasional episode of Hoarders or something to remind myself to keep things in check
BUT my stuff is used in my crafts.

I've always recycled and reused a lot but the cardboard tube thing escalated one day when I was taking my grandson to school and along side the road was-TADA-a whole bunch of long [maybe 5']cardboard tubes that had evidently fallen from someone's vehicle. I didn't have time to stop because we were running late but I rushed back before someone else could get MY cardboard tubes, came to a screeching stop, jumped out, threw those tubes into my van and sped home before the loser of the tubes realized they were gone. Cardboard tubes have been a staple in my crafting ever since. I even used them to hang window valances once to keep from purchasing anything. Have I told you that I am super cheap?

Ok, enough of my torrid background. Today, I am sharing how to make a doll cardle using a empty salt or oatmeal box-a cardboard tube of sorts. 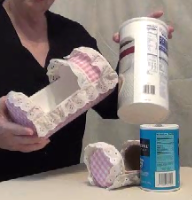 I made these for my daughters when they were small and now for my great granddaughters. I don't remember making them for the granddaughters but may have. The doll cradle will not last forever but is a fun thing to make and play with and creates a memory for the child of having been a part of creating her own toy.

The only things you need are:a salt or oatmeal box, some fabric or paper to cover, [could also be painted], optional lace or other trim, hot glue gun and scissors or craft knife.

Here is a short step by step video for making the doll cradle.
For printable step by step instructions go to www.FaveCrafts.com @ http://www.favecrafts.com/Green-Crafting/Oatmeal-Box-Doll-Cradle. While you're there, cruise FaveCrafts for lots of reclyclable crafts of all kinds.

I hope you enjoy making this with your daughter, granddaughter or great granddaughter as much as I have enjoyed making them through the years. I loved being able to share this idea with you.
God bless you
Carolyn Wainscott