Back to the "Box of Scraps" challenge issued by Sissie's Sewing on Facebook in which entrants received scraps in the amount that fit into a box the size of a vhs tape. ﻿
Yesterday's post featured the third place winner, Sammantha, who made so many pieces from such a small amount of fabric, I couldn't leave out any one of them. I thought what she accomplished was tremendous.
In fact, after looking at the photos of her entry, instead of throwing away some scrap [and I do mean scrap] fleece left from making great granddaughters gowns and matching doll gowns as I had intended, I serged some larger fleece pieces and stuffed them with the scraps to make our tiny chihuahua puppy some thick pads for her box and she is loving them. Now I know these are no where near as inventive as Sammantha's creations but I did use up some scraps instead of garbaging them. Way to go me.
OK-Let's get on to more winners
Second place winner was Leann, who made picture frames from her scraps. I couldn't tell how big they were so contacted her and she said they were 8"x10". I was particularly drawn to them because Leann used some Native American prints that she had received. She also told me that this is the first challenge she had participated in and was anxiously waiting for the next one. She went on to say she had been wanting to make picture frames and this was the time. Maybe some time she would like to share the process with us. 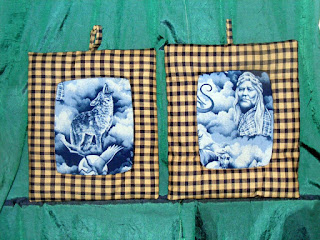 The first place winner was Judy whose entry was a lace covered box. Additionally, Judy created a floral and a pin cushion that look as though they could be used as decor on a multitude of things including the box. They might be given to a Grandmother or favorite aunt to be worn as a corsage or on a Christmas tree. I think I will ask Judy if she would mind sharing her ideas also. Her use of the lace and the florals I thought were very Victorian looking. There was something for everyone in this challenge and so many different perspectives, even if the scraps received were not to the taste usually used. 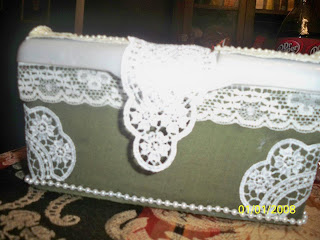 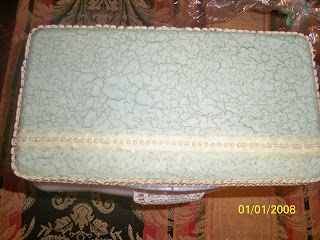 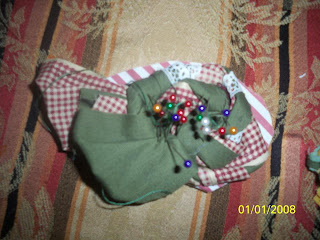 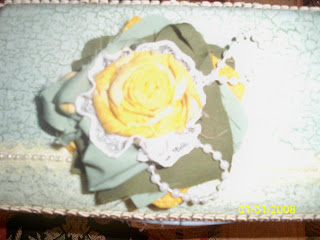 Congratulations to Leann and Judy. Love your designs. Want to try them. I know your ideas will help others, too.
Will post the grand prize winner  soon along with some of the other designs submitted. This challenge by Sissie's Sewing sure got the creative juices going. So much diversity. Can't wait to see what everyone comes up with next.
Happy crafting all and God bless you,
Carolyn Wainscott
Posted by Carolyn Wainscott at 2:48 PM