THIS IS MY LIFE ON THIS QUILT

That is what I was told he said when he opened his tee shirt quilt from his Mom and Dad on Christmas-it was a complete surprise for him.

A few weeks before Christmas I saw an inquiry on a Facebook page for someone to make a tee shirt quilt. It wasn't a page I visit often and she was looking for someone who had advertised that they made the quilts. Even though I had not posted that I make the quilts and even though I surely wasn't looking for any outside work, I answered the inquiry on a whim. Teresa messaged me right away about making the quilt for her son, Gary, from some of his shirts that had been saved through the years and asked if I could possibly get it done before Christmas.

A couple of days later Teresa and Gary, Sr. showed up with a bag of tee shirts. There was a range of adult shirts from different sports that Gary, Jr. had participated in or followed plus a very small sweat shirt with a football on it. They didn't want a tied or "rag" quilt-it was to be a traditional quilt and black was chosen to do the sashing, I already had wide quilt backing in white I would use and the batting because I keep those in supply for my quilter but I didn't have the black on hand so I purchased 5 yards at Joann's and thank goodness for coupons. It took close to the whole 5 yards for the sashing and binding.

My sister, Shirley, had also brought shirts for other projects we were working on but we won't even go there right now.

I was perking right along, the large 15" template for tees makes the job so much easier to cut and be uniform. The lightweight fusible interfacing was cut and fused to the back of each block, borders and blocks went together quickly by chain piecing, then each row matched up-man, was I getting good. The quilt top, batting and backing were put onto the quilter, quilting went well, binding put on and there was that small child's sweat shirt.

The little shirt was left in one piece and hand stitched onto the quilt close to the large center block. All the blocks had been cut to the 15" template except for that block. The shirt had been airbrushed and the artwork was larger so it was expanded into a 30" block by adding strips onto the top and bottom. It worked out well. It had Gary's name on it and I didn't want to cut the shirt. 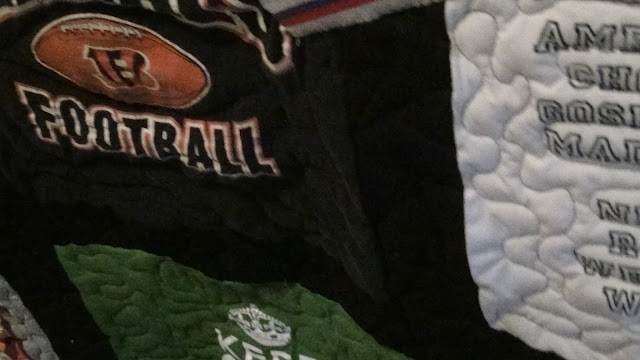 here is the largest center block and the small sweat shirt 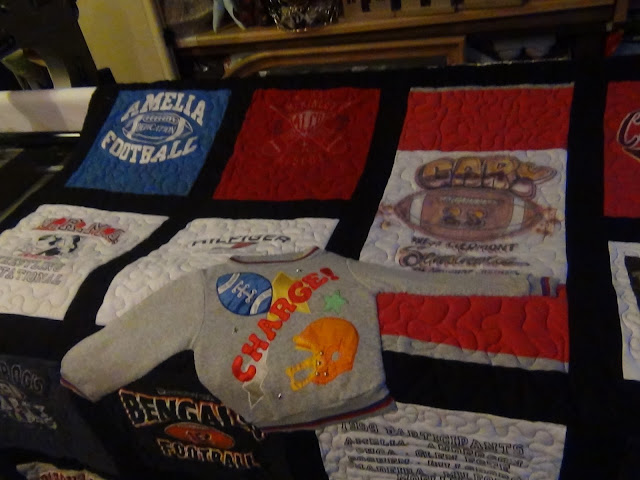 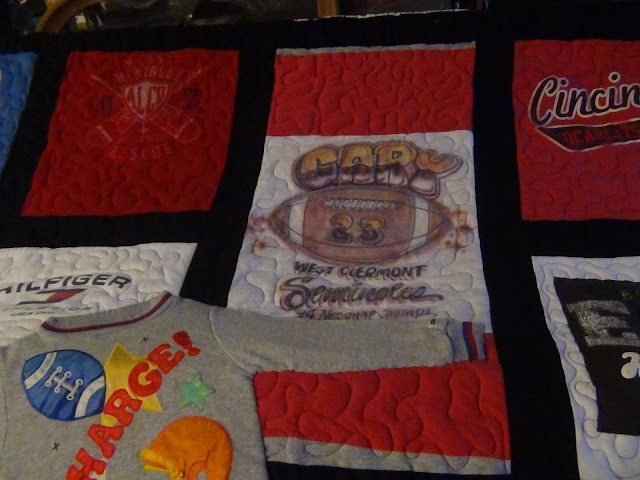 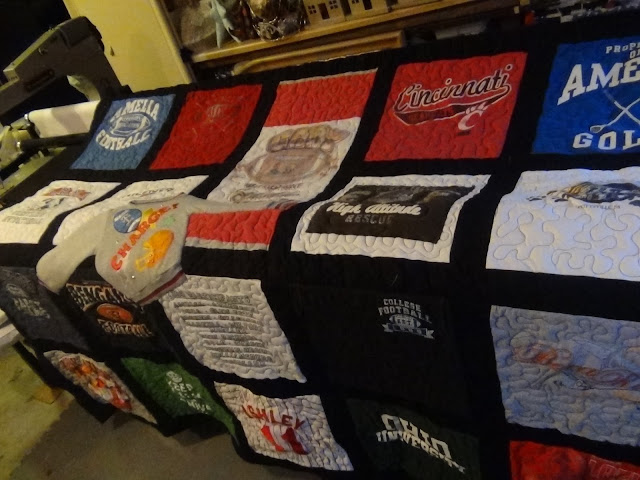 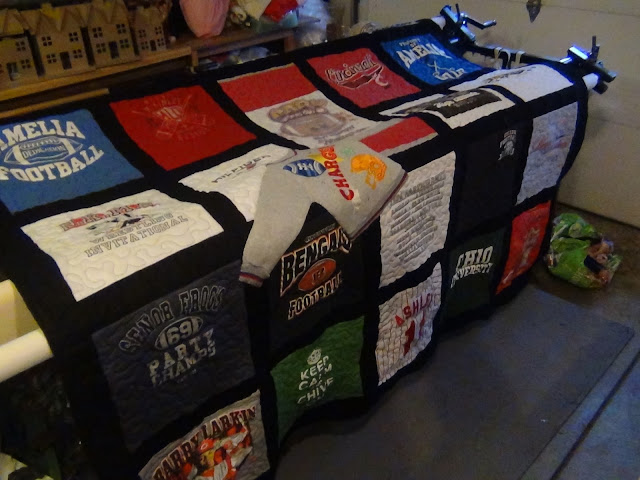 Gary, Sr. came over to pick up the quilt not too long after I called them to say it was done and they were very pleased. He said he just couldn't visualize when I had explained what I would be doing. That's ok, sometimes I can't visualize myself sometimes. They had also brought another shirt that hadn't made it onto the quilt and could I do something with that one?

I asked him about the small shirt and he told me Gary, Jr. had loved the shirt and always got excited when they put it on him when he was just a little boy so it had been saved and it fit so well with the quilt.

And then soon after they got home I got a phone call. Three of the sewn in, sashed, quilted and bound blocks were not their shirts-I have made a whole lot of mistakes in my quilting days but this took the cake. How in the world do you get wrong shirts into a quilt when there was nothing else there that closely resembled shirts-there were other quilt fabrics but no shirts. I told my daughter I couldn't get over this, they had to be completely mistaken and then she said well, it probably was a bag of shirts she had brought in and plopped down that just may have gotten mixed in.

The quilt was brought back the next evening and I spent the next day taking out the quilting in the three blocks, cutting out the top layer and hand piecing a replacement in each-then back onto the quilter to be quilted. It really wasn't as bad as it may sound and you really can't tell those blocks from the rest of the quilt.

The extra shirt was made into 2 pillow cases. I forgot to take photos but they turned out nicely. I took the shirt to Joann's with me so I could get as near a match to the burgundy knit and got an almost exact match.

Everything turned out fine and they were pleased. Pleased enough that the day after Christmas there was a knock on the door-it was Teresa bringing me a fruit basket-I thought that was extremely nice, don't you?

This is the first contract quilt I have done in years, still don't know what possessed me to answer that inquiry that day but it all worked out well. Kinda, sorta got me in the mode of a deadline and getting myself motivated to accomplish more. I get a lot done but sometimes feel guilty if I'm not busy all the time but the kids are quick to remind me how old I am.

Have you checked out my crafting/quilting video tutorials on Youtube